Now that we got some of the boring stuff out of the way we can move on back to the fun and games!

There is a lot of general speculation out there that carnival games are all rigged and they are all designed to completely rob anyone who attempts to play them. Well coming from personal experience of working directly with carnies and seeing their games I can say that they are not all bad. The games that we had at Springfest although sometimes very difficult, were all completely legitimate and were definitely not made to scam people. 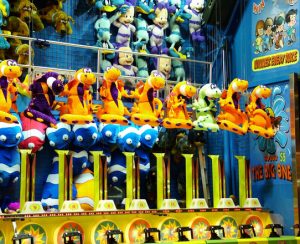 I have definitely seen games on television shows and at certain fairs where they were rigged and next to impossible to win. Let me say that I think this is reprehensible and these people should honestly be arrested. Fairs aren’t designed for people to just make money off of unsuspecting and innocent people, but to bring people together for a great time for the whole family!

So just keep that in mind next time you are at a fair or carnival. I would like to think that most carnies out there are not bad people and are just employees running legitimate games, but there really is no sure fire way to tell if they are your friend or your worse enemy so be wary.

Needless to say, State Fairs can get a little dirty. I hope that this is sort of common sense for most people out there but I feel like it is […]

Yesterday I promised I would talk a little bit about my experiences with clean ups not going over as smoothly as hoped so here you go. The Fateful Barn So […]

So now that the fair is over for the year, how can one make their own fun until next season? By the way, this is assuming everything went smoothly and […]